Last night, I got a promotion of sorts. I was moved from pantry station to sauté. That means instead of salads, chips & salsa, brussels sprouts, hummus, etc. I was doing sandwiches, mac & cheese, and flipping burgers. I was low-key worried it would be a disaster, because changing stations on Friday night seemed like a bad idea… too fast and furious for me to think, “I got this.”

At the end of the night, I was so euphoric I could have lit up a car battery. It was insane how fast I moved, how many pans I had going at once, how many burgers turned out gorgeous. It was amazing, because what I have with our lead line cook is special… it’s clear communication, calls and “heards” and “all-days” without missing a beat.

In terms of burgers, we’ve switched from the grill to the flat-top, which I think is so much more gorgeous. The burgers are allowed to confít, a French cooking term for “cooks in its own fat.” My own rule for burgers, which I can’t seem to get across to other cooks no matter where I’ve worked, is “respect first contact, and only flip once.” Continually flipping them interrupts the beautiful crust that develops on the outside, keeping the meat juicy on the inside. I got the phrase “respect first contact” from Ferran Adrià of elBulli fame. I can’t remember which interview I read with him where it says that, but I think it was in Vanity Fair…. or not. I’ve slept since then.

Anyway, flipping the burger before the crust has had time to develop rips it off and tears the burger to shreds if you’re not careful. If the crust is intact, it will lift on its own. This is especially true of an open flame. The contacts are much deeper and further between, so the crust sticks to the contacts and if you flip it early, you’ve got rare (if not raw) ground beef flying at you…. and it’s hot AF. Additionally, on an open flame, the extra fat drips off, which just doesn’t taste as good unless the seal of crust is tight on both sides and the juice is locked in…. the thing that is missing from most, if not all fast-food. A really great burger takes time. I would rather wait an extra couple of minutes for something fantastic. It is also my joy to provide that fantastic to others.

I would have made all my past chefs very, very proud. I wish they could have been there to see it. The key is just not to get flustered and keep cooking, no matter how many orders come at you at once. Nothing helps more than a little Klonopin and a lot of caffeine with B vitamins. It leads you into this easy-yet-fast existence, because you don’t have the ability to get physically worked up, like heart and brain race. Of course there’s a storm around you, but you don’t take it in. It must work for me really well, because I got a lot of attaboys and “good jobs” last night from our lead line cook.

When I got home, I didn’t deflate like a balloon as I normally do. I was jazzed beyond belief. Perhaps that Mexican cola at the end of the night was a bad idea. 😛

It was just so life-affirming that I was baptized by fire and ended up walking through it unharmed.

In other news, my interview with University of Maryland is confirmed for July 31st, and I think it will go well because I have nothing to lose. An interview with Conan O’Brien taught me that. When he got the job as host of Late Night, he already had a great job writing for The Simpsons. He was happy- this was just another step in a different direction, and if he didn’t get it, he was content with the job he already had. It feels good to be in the same boat.

The new job is stepping out on a limb, because it’s sort of out of my comfort zone… but great things don’t happen if you’re not ready to approach the edge, unafraid to fall because you’re pretty sure you can fly. The reason that I say “sort of” is because I’ve been in IT a long time. There’s little difference between being trained at one support job and trained for them all. The “outside my comfort zone” part is that I am ridiculously in love with having my days free so that I identify as a writer first, cook second. Stepping toward the ledge is losing time and just rolling with it.

Tonight I’m off, though, because my kitchen manager is great about not making me work late on Saturdays, because I come in very early as the dishwasher on Sunday. I get everything ready before service, cleaning bathrooms and wiping down tables, etc. On the weekends, we serve lunch, which is why my shift starts between 0900-1000.

Tonight I am meeting up with a friend for dinner and a movie- Argo. I’ve hyped it up so much I hope she loves it. I’ve thought it was one of the best movies ever made since the moment it came out. She argues that the best movie ever made is But I’m a Cheerleader. As far as queer movies go, I’m not convinced, but she’s entitled to her opinion. 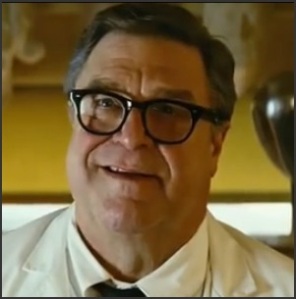 The teenager that played Graham is also in Argo, so perhaps that will carry some weight. I just can’t get over John Goodman. He absolutely steals the show, as he does in most media…. and I bet you can guess which t-shirt I’m going to wear. I think it has street cred with the International Spy Museum logo on the sleeve. You can still get a t-shirt with that most famous line, but not from them. They’re out. I got one of the last ones on clearance.

To me, it’s going to be interesting to see which movie quotes stick between us as inside jokes, because with everyone I’ve talked to after seeing it, they’ve been different. The one I use the most often actually comes from Bryan Cranston, who says, “brace yourself. It’s like talking to those two old fucks from The Muppets.” But that’s just one out of a hundred that I’ll pick on any given day…. usually “this is the very best bad idea we’ve got” or “…we did suicide missions in the Army that had better odds than this.” There are few conversations that cannot be made better with a funny quote from this movie… but don’t let them distract you from the drama.

It’s intense, which is why the comic relief is so important…. as important as comic relief in the kitchen when drinking from a fire hose also has better odds of success.

Last night, though, I WON. #touchme

Connect with the Author

Make Me a Professional Writer