My dance card cleared out for tonight because the woman I was supposed to go out with is taking a project management course that has several hours of homework at night. So we’re going kayaking on Sunday as long as she doesn’t mind teaching a total n00b (I am amused that LibreOffice recognizes this as a word). I haven’t heard back from her on that one. We shall see what we shall see, but it sounds way more fun than just meeting up for drinks.

If we’re talking whitewater, though, perhaps hiking is more my speed. I’ve been itching to get out and explore because I was such a fan of getting lost in the Gorge, taking pictures… the funniest 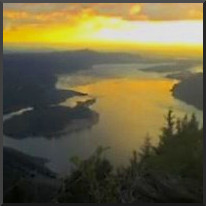 time was when I laid down on the ground at Angels’ Rest near a cliff and had Dana hold my feet so that I could get the shot. We decided that it would be Dana’s job if I fell to call my dad and say, “Leslie was bein’ a dumbass, and got herself killed.” Said with as much Southern drawl as possible, of course. But what did I care? I GOT THE SHOT.

It amazed me that the picture turned out as beautiful as it did, because this must’ve been taken in, like, 2004, when all I had was a 2 mp camera that came on a phone that would seem ancient by today’s standards. So if the color is a little off, remember that it is not color-corrected. It’s just old. I am sure that I could have found a way to punch up each color, but that was the lighting we were in, so it stays. There were so many funny hikes between Dana and me, especially when we were just starting out. Our first hike was up to Multnomah Falls and back down again, but eventually we got more adventurous, like passing Multnomah and crossing over to Wahkeena and standing in the river, literally gulping water because it was moving fast enough that we didn’t think we’d get giardia… And then there was the day we’d realized we’d hiked, like, six and a half or seven miles and had to hike back. We were dying. It was the Bataan Death March of Troutdale, Oregon. Our legs were shaking and we were wet and cold due to the pouring rain… and that was when we realized we were still a half mile from the parking lot. It was definitely beer-thirty by then, and we went to Edgefield for a pick-me-up before we drove back.

But by far, the funniest picture story I have is that Dana and I were driving around Sacramento to get a break from the whole famn damily (Counselor lives there and the parents were in town), and as we were going down the highway, I spotted an enormous field of sunflowers. I said to Dana, “STOP!” It wasn’t unusual for me to say so, because she knew it had something to do with me wanting a picture…. it always did. In order to get the shot I wanted, I had to climb down into a muddy gulch between the highway and the flowers, and I got stuck up to my shins. The mud was so heavy that I couldn’t get back out. I literally couldn’t lift either foot to get traction, so I reached down and took off my

shoes, my beloved pink and silver Nikes, and crawled up the side of the gulch. Dana was mystified as to why I was walking back to the Jeep in my socks, but I opened the passenger door and said, “I GOT THE SHOT!” Never mind that if the farmers were not paying attention, my shoes are probably still there, covered in ten feet of mud by now. Luckily, it wasn’t the only pair of shoes I brought on the trip.

I actually ended up taking a series of pictures that day, but this one is my favorite. Dana’s favorite is one I named “Peek-a-Boo,” where I discarded all of the color except the yellow and brown on the small sunflower sticking out at the bottom. I think I still have a copy of it somewhere, but seeing the mud reminds me of just how much I lost trying to get one damn picture, and even so, it was worth it. The aspect ratio is a little off, because it was originally “wide-screen,” but I must have done something in the meantime that changed it… not sure what. I just know that I had to go REALLY far back into my photo gallery to find it, because again, this was taken a long time ago, but at least I had a decent camera phone on me… possibly the best one I’ve ever had- a Sony Walkman phone that I would buy again in a hot second if I thought it would comply with today’s communication standards. I ended up taking other gorgeous shots with that phone, including a view of Portland from Senator Ron Wyden’s office (again, working as a tech contractor… the only reason I’d be in Republican senator’s office in the first place).

If I’m going to take up kayaking, I need to find some sort of waterproof case for my iPhone, because there is no way I’m going to be out on a river and not want to say, “STOP!” A wrist strap is probably advisable as well… because I’m not known for being a klutz or anything…. 😛

So tonight, while said date is doing her homework, I’m going to make homemade mango salsa for the all-DSI cookout tomorrow. I may even be on grill duty, having had a lot of practice at flipping burgers. I just wish we had a griddle instead of a grill, because while grilled hamburgers are delicious, they are nothing compared to the absolute perfection of letting them confit (cook in their own fat). It’s also a thrill just to be cooking anything. It’s been a long time, and I’m looking forward to it. Again, cooking was such a part of my life that I don’t really have time for anymore, and I miss it. I might even listen to Aqua as I’m cleaning up… because nothing says cleaning up a cooking mess like “Dr. Jones,” which as Whovians, Drue and I changed to “Martha Jones,” also a doctor…. a real one, not a Time Lord.

So I suppose tomorrow is Doctor Who t-shirt and Chucks day… but let’s be honest. When is it not?

When I’m kayaking, I guess.