Yesterday was the pig roast at Dan’s, and I can’t tell whether I ate too much, or it was just my first time in public in ages where a lot of people were gathered, but I woke up this morning feeling like death warmed over…. 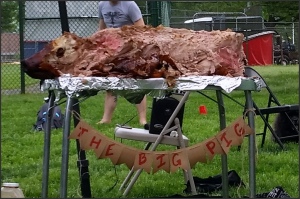 but I’m guessing still a sight better than the pig. I should have taken a picture of it before we started hacking away, but I didn’t think of it until I’d already cut off both cheeks.

Later on in the day, I heard some woman say, “somebody even ate the cheeks!” I turned around and said, that was me. They thought it was weird. Pork belly and cheeks are pretty much the most expensive thing on the menu if you order at a restaurant. Who’s weird now? You don’t become a cook without knowing these things, especially if you’ve worked for John-Michael Kinkaid- something about which I’ll always be proud. Although if Kinkaid had been there, we probably would have hacked out the offal as well. I believe in nose to tail, just wasn’t brave enough in my technical ability with no true Chef’s knife/santoku. It was literally the best pork I’d ever tasted, but of course the cheeks and skin were extraordinarily fatty and I’ve been eating a vegetarian/vegan diet at home for as long as I can remember (I don’t have anything against meat, it’s just that I don’t buy it for the house because I’m afraid I won’t use it before it spoils- I’m not much of a cook these days). During the night, the pig decided it was payback time…. though, thankfully, I did not have any dreams in which someone hacked off my cheeks and ate them just for spite.

I just ate enough fat for three lifetimes, and my stomach will not let me forget it anytime soon. I had some steel-cut oatmeal and yogurt (Vanana from Trader Joe’s, my favorite) to try and start the cleaning out process- trying to get rid of whatever it was I was reacting to, but it didn’t really help. I finally went to 7-Eleven and got a Coke and some Pepto Bismol, hoping that activated charcoal would do better than oatmeal. It’s been about an hour, and I do feel marginally better, but not better enough to actually get out and do things. The reason I am not totally convinced it was the food was that when I isolate and get out of the public eye, when I emerge from my cocoon I am exposed to all kinds of things that I’m not normally…. especially when there are little kids around. I once dated a teacher and it was the sickest I’d ever been in my life. Every week there was something new she was immune to and those little snot factories passed on to me.

Yes, my stomach hurts, but I also had a fever before I knocked it out with arthritis-strength Tylenol. If I’m still feeling poorly tomorrow, I’ll go and see Dr. Akoto, my Nigerian-American GP that is sometimes hard to understand, but absolutely on top of it medically. I wish that I was fluent in French, because my friend Courtney uses him as well, and she says that while it’s hard to understand him in English, his French is perfect and she has no issues. #funfact

Sufficed to say, nothing hit me in the way of illness until I got home, so the party was really, really fun. My cousin Nathan (who also lives in their hood) and his wife Emily stopped by for a little bit, and lots of the people I’d met through Dan were there, so it’s not like I just had one person to talk to, but many.

It was a good end to a sad week, because I asked the friend I wrote about in an earlier entry if we had a dialogue worth continuing to reach common ground, and she said no. It was not unexpected in the slightest. I knew that unless I wanted a friendship where nothing grew, and I was just top-level hilarious, she was outta there. What I should have said is that if she just wanted top-level hilarious, read my Facebook feed like everyone else. That’s where I’m funny and there’s rarely anything of substance.

It is here that I write about everything from the funny to the disastrous, and even though it hurt to hear that I’m not her cup of tea, it felt good that she’s not mine, either. It has been my experience that friendships grow or die, and rarely remain stagnant over years. There’s only so many Trump jokes I can tell before I say how are you? and really mean it. She managed to doorknob me with some choice words that I will not repeat, but solidified my decision that this was not a friendship I’d ever be happy with.

Dan took me aside late in the evening and said those very words, how are you?, and I told her everything that was going on with my stepdad, and said that I wasn’t looking for advice because I really just needed to say words out loud. She laughed and said, good, ’cause I ain’t got nothin’ for ya. What she did offer was a night in Dupont at a Greek restaurant and this bar we love where you can play board games. I told her that I remembered laughing about how heteronormative and whitewashed she noticed Guess Who? was. We agreed to take pictures of it for future reference.

The last thing she said to me as I was walking to my car was, don’t forget to reach out to me.

In a lot of ways, the Leslie Avenue Capers are just beginning… but we have such a solid foundation on which to build… and by that, I do not mean stealing street signs, as much as the devil on my shoulder says I should. 😉