When Lindsay, Forbes, and Matt went to the cemetery on Mother’s Day, they found that my mother’s headstone had been placed, and it turned out beautifully. The music staff, for those that don’t read music and/or can’t see it clearly, is Amazing Grace. At first, I thought the opening interval was wrong, and I had to check it to make sure. You cannot imagine my relief that it’s right….. hey, it’s in a different key in the hymnal, and I couldn’t abide a pianist with a headstone that sort of played something. Besides, placing the staff was my idea in the first place, originally a James Avery™ ring that is now discontinued. I thought it was appropriate given that my mother wore a James Avery ring my entire life, just not that one. It had an eighth note charm that fell off a lot, so every few years she’d either get it put back on or have to buy a new one, depending on whether she could find said charm again. 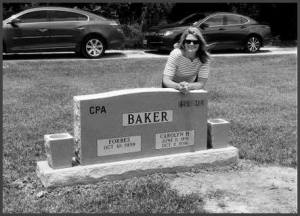 I wish I had been there in person, but eventually, I will be. I will sit under “Fred,” the tree I named after no one in particular, and by then it will be taller and more full than it was when we buried her. The grass will have grown back so perhaps I can lie on it and look up at the sky. Sorry if that seems morbid. I don’t have a fear of cemeteries. I find them soothing and peaceful- the perfect place for a picnic whether it is Dia de los Muertos or not.

It led me down the path of thinking about last year’s Mother’s Day, when Mom and Lindsay used FaceTime to call me. I hate video calls and rarely agree to them because I am shy about being on camera… well, video cameras, anyway. Pictures? No problem. Video? I’d almost rather have a root canal. I am so self conscious because of my cerebral palsy and my strabismus. If I’m not worried that I’m moving funny, I’m worried that my “lazy eye” is showing. At least now that my eyesight is so poor in my left eye, I at least know which one it is…. I enjoy wearing glasses because they hide so much. I mean, they correct the drift most of the time, but they also draw attention away from it altogether. #blessed

With my family, it’s mostly ok. Everyone else? Not so much. The only person I’ve ever offered to video call outside my family is Argo, because I wanted her to meet Dana and me in person. To my great relief, it did not happen. My goofy moves are so much more adorable in person…. I think. You tell me. I don’t get to watch me that often…. also, I hate that video does not pick up the bass in my voice, so that in 3D I sound like a normal person and on video I sound like SpongeBob…. I think. You tell me. Maybe the bass in my voice is only bone conduction in my head and I always sound like SpongeBob. Oh, dear God…. please, no.

Anyway, here is the last Mother’s Day picture I’ll ever have of my mother, about which I feel nothing but regret and yet, cannot forget that I didn’t know it was going to be the 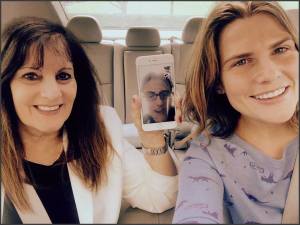 last one at the time…. Does that seriously look like a woman old enough to die? As I hit 40 in September, I am realizing more and more just how young 65 actually is. Today I heard The Moth’s Mother’s Day special, in which the host interviewed his own mother, nearly 90. When his mother dies, there’s not going to be a single person that says, “dear God, they took her too soon.” I feel like I am slowly coming back to life after just wanting to crawl into a hole and never come back out because nothing was the same, nothing made sense, nothing filled the deep hole of regret inside me that I didn’t walk in the light while I had it…. or at the very least, not as much as I would have wanted.

Grief being different for everyone keeps me sane. Knowing that there’s never a right or a wrong way to feel emotional pain is very freeing. I handle things as they come up, and try not to bottle anything, even though in some ways, compartmentalization might help. If I could just stuff down some of my emotions, maybe I wouldn’t be such a walking raw nerve.

I am doing my best to change my own mood. Yesterday, it was jamming out to Eminem and laughing hysterically at the lyrics to Love Game. Be forewarned, if you are offended easily, it is absolutely the dirtiest song I’ve ever heard in my entire life, bar none. And yet, by the time Kendrick Lamar gets to “have a blessed day,” I am shaking without sound and tears are running down my face trying to keep my housemates from thinking a cat is dying upstairs.

Life goes on… interestingly enough, the only song I absolutely hate in The Beatles catalogue.

But maybe my soulmate is Polythene Pam.

I’m not going to video call her to find out, though.