On Thursday night, vandals cut the word “black” from our large #blacklivesmatter banner in front of our church, and placed a 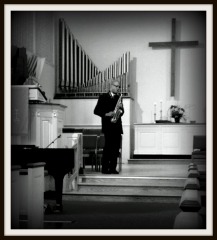 picture of the reporters in Roanoke being shot on the glass doors that mark the entry. The police are involved because the picture looked like a direct threat. Despite this, the church was nearly full this morning as Rev. Jeffrey Thames guided our thinking in facing fear.

The title of his sermon was The Certain Samaritan, which talked about The Good Samaritan and made the point that we are certain we are Samaritans as well. We will not back down from attending church because of this threat. We will continue to do the work of peace and justice that we always have, because it defines who we are as a congregation.

But Jeffrey didn’t start his sermon with words. He stepped out with his horn and played Amazing Grace while the congregation sat silent, reverent in the threat placed upon us and praying for relief. I heard sniffling and saw a woman’s tears. All of the sudden, it got real. Someone had taken a piece of us, and now we needed to know what to do.

As Jeffrey played, I could hear the entirety of the people gathered take a deep breath. Sometimes, there are just no words to be said. As James Duffecy once said, music can name the unnamable and communicate the unknowable… and there is just a world of things we don’t know. We are venturing into the future with hopeful hearts, not that we can prevent violence, but that we can respond to it in a Christ-like way. Christ would say to turn the other cheek. I don’t necessarily believe that. While I do not condone meeting violence with violence, I do believe in non-violent protest… to take back our power as victims. To stand up and say that even if you try to hurt us, we will not back down. As Jeffrey said this morning, “we will continue to let people rest and recuperate as they need.” We will continue to clothe the naked. We will continue to feed the hungry. We will continue to make people of all faiths and origins our friends. We will continue to fight without a fight. It doesn’t take violence to respond. It takes certainty.

I want to believe that I am one of those Samaritans in Jeffrey’s sermon. When Rev. Matt said that he was a little nervous about church today, I told him afterward that I was willing to run toward the danger, because I don’t believe in using a Bible to beat people down, but hymnals are fair game. I was only half kidding. I don’t want to meet violence with violence, either, but if active shooters had shown up, I would have found a way to help. What that might have been, I don’t know. But I do know that I am at least short enough to throw someone off balance and possibly bite an ankle…. not because I want praise or gratitude, but because that’s the kind of person I believe I need to be.

Fred Rogers said that in tragedy, look for the helpers.

Jeffrey inspires me in that kind of confidence. He was a Marine (oorah!) who was routinely called to run toward danger, and he did. But violence for Jeffrey happened right here in Silver Spring. A cop asked him for his ID, and when he reached into his coat pocket, the cop pulled a gun on him. He was on the streets trying to help the homeless, and he was almost shot. Rev. Matt got him a reflective vest that says “Clergy” on the back so that hopefully, it never happens again… because there is no chance in the world that Jeffrey will ever stop running towards danger. Where there is darkness. the people who are called to be Christ in the world bring the light.

All Christians are called to be Christ in the world, not just the ones who study for ordination. The question presented today is what kind of Christian are you? Are you the kind of priest that would have walked by the injured man because you don’t want to get involved, or are you the kind of person that would take the injured man to an inn? I audibly gasped and said “wow” when Jeffrey uttered this line… that it is interesting that Jesus used the word “inn” when there was no room for him when he was born.

It was a clarion call to keep working, keep fighting, keep MOVING toward the kind of world we want to create because we are who we are, and that is CHRIST Congregational Church. What does it mean to attend a church that has Christ in the title?

I think we’ve decided on resilient.

4 thoughts on “Sax and Violence”