Today has not been the best (so far, it’s only 11:30 AM). I generally get a cold at the beginning of spring, because my allergy medication just can’t keep up (gross out warning) and snot just runs continuously down the back of my throat until it’s raw and scratchy. I haven’t lost my voice, but when I woke up this morning, I did have that sexy Debra Winger rasp going on.

It’s gone now, after a really long, hot shower and something warm to drink- hence the title. I normally wouldn’t be caught dead drinking Folger’s Classic Roast,™ but I ran to 7-Eleven for essentials and it’s what they had. Seriously. That’s it. I’ve never been to a store in my life that only carried one type of coffee, and it just happened to be the Budweiser™ equivalent. However, desperation made me buy it, anyway. I haven’t had coffee in a couple of days, and like most of the population, I’m so addicted to it that withdrawal is a thing. Hey, it’s my only vice. At least give me this one.

To my surprise, when I made the coffee the way I like it (one level scoop per cup), it was more than drinkable. Probably the reason I thought I hated it was the way churches tend to make it……. not calling anyone out on the carpet, but I have had my fair share of shitty brown water that they called “coffee.” To be fair, it’s hard to know the ratio for a 40-50 cup urn. 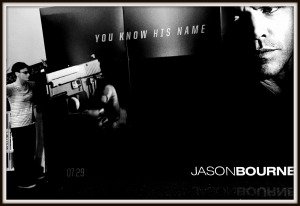 As I am singing the praises of this blessed event (coffee is divinity), the playlist in my headphones is called Stranger Than Fiction on Spotify. It’s all the soundtracks from Argo, Slumdog Millionaire, all the Bourne movies, and The Kite Runner. It’s killer, if I do say so myself…. and it’s public if you want to check it out. Even though I put it on shuffle, I always start with The Bourne Identity‘s main theme. The English Horn solo just blows me away…. probably the only iconic English Horn solo on record for those who aren’t classical music nerds (like me). As for the Bourne series, my favorite is Supremacy, and the only thing I really liked about Jason Bourne was the soundtrack and the picture my dad took of me with the movie poster.

For instance, I was sitting in the theater doubled over in that silent laugh where you’re just shaking violently with snot and tears running down your face, because someone is hacking a computer for information on a black op, and transfers the files from a folder called Black Ops. Because of course all intel agencies hide the documents regarding black ops in a folder called BLACK OPS.

And of course, that led me to think about what I would have named that folder. Probably something like birthday_party_pictures or cat_photos. At the very least, something that someone wouldn’t click on immediately after logging into my computer. HELLO!

Of course, as a computer nerd, it’s probably something only I and my IT peeps would pick up, because it’s supposed to be exposition for the audience. That didn’t not make it hilarious.

It was especially fun to go to the International Spy Museum and to see Jason Bourne with my dad all in the same trip. I don’t know if it was a special exhibit or in their permanent collection, but there was a fantastic James Bond adventure.

Most of the intel agencies around here now have entertainment departments (CIA was the last to get on board), so recent movies like Salt and Atomic Blonde, as well as TV shows like Homeland and The Looming Tower have real-life advisers that make the shows fictional-yet-believable. According to a book I read on the subject, the lives of spies are blown way out of proportion, sometimes to make the movie better and sometimes to divert the public’s attention from the way The Agency really works. For instance, it’s not as interesting to watch a movie about espionage if all that happens is a huge amount of paperwork. Also, no intel agency is ever going to publish in any form the way they operate, because lives depend on it….. publishing it all for us is publishing it all for “them,” whomever they are.

…which invariably leads me to my white hot hatred of Julian Assange and Chelsea Manning. Disagree with me all you want, but I’m not going to change my mind. Not only did they put American lives in danger, but all the friendlies we’d managed to turn in other countries as well. People seem to forget that they’re called “confidential informants” for a reason…. mostly because they could be executed by their own governments. I haven’t read every single document that was leaked, because first of all, I don’t want to. I’d prefer to stay frosty and let the professionals handle it. I couldn’t spy my way out of a paper bag. Second of all, I am sure that it wasn’t just American covers blown, but Mossad, MI-6, etc. and I don’t want to read about it because it will just feed the anger I already have. I have enough anger in my life. I don’t need to add anything on top of it.

That being said, the Julian Assange biopic, The Fifth Estate, is very good. Even the title is clever- moving us forward from newspapers to the Internet. I don’t know how much of it is real, but I liked it, anyway. The biopic about Edward Snowden (called Snowden, with Joseph Gordon-Levitt in the title role), however, kept me up for three days, because I would be frightened to learn that even a third of it is real. Don’t watch it at night. Hold someone’s hand. It will creep you the fuck out. I’m serious. Take my advice or don’t- at your own peril (safety not guaranteed, no refunds, you break it you buy it, etc.).

As you can tell, I’m a fan of intel movies, mostly because now it generally involves computers and hacking (BLACK OPS folder…… hahahahahahaha). I am not clever enough in that arena to figure it all out (and don’t want to), but fictionalized versions are awesome. In my daily life, I am just a regular geek who loves Linux, but would crap my pants if asked to write any sort of program. In terms of the logic behind the languages, I’m barely a step above “Hello, World.” It is not my calling to learn to hack, crack, or program…. but that doesn’t mean I don’t love a good piece of media about it.

The only intel show that I have problems with is Homeland. I watch it anyway, because it’s a good story and I like all the actors (particularly Mandy Patinkin). But I just get a sinking feeling in the pit of my stomach every time Carrie Mathison goes to her “crazy place.” I realize that she’s Bipolar I and I’m Bipolar II, so basically nothing she does is something I would do. But there’s a part of me that knows her portrayal of that kind of crazy is dead on, and to me, it is not comforting in the slightest that I understand. I feel like I get her in only the way another bipolar person would, and in those moments, watching truly sucks. It’s like a train wreck- I can’t look away. I’m too invested in knowing what happens now.

Leaving out the part that nearly everything Carrie does would, in real life, have landed her in federal prison (or a dark site) long ago.

But it’s just a TV show. Suspension of disbelief and all that.

Am I crazy, or is this Folgers really working for me?