I thought seriously about boycotting Starbucks until I realized that I still had money on my gift cards. I reasoned that my coffee had already been purchased, and if the boycott persisted beyond that, I wouldn’t spend my own money there. 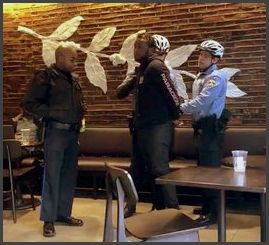 Thanks to social media wisdom, though, I realized something important. There are thousands of black baristas, and this one shop in Philly was the problem, not Starbucks as a whole. If that sounds callous and racist, I am very sorry. But the truth is that I live in a neighborhood with lots of black people. Some are African-American. Others are immigrants, mostly from Cameroon, Nigeria, and Eritrea. Boycotting my local store might lead to cutting down on employees as they get less busy, and I am not about to contribute to it.

The plain truth is that this is not a Starbucks problem. It is the top-down system of oppression that has been in power for hundreds of years. For instance, why didn’t the police officers just laugh in the barista’s face? Why, after explaining the situation, were the men still cuffed?

There is blame to be had all the way around, and when the police were called, they had absolutely no reason to follow through. What about the barista’s story made any damn sense except the police being as racist as the barista? I don’t even have a jacket as nice as the one the man on the left is wearing, and I guarantee you I’ve looked worse in a hoodie and jeans stumbling into a coffee shop than the man on the right. This is not to say that every black person who walks into a Starbucks must be dressed a certain way. I am only making the observation that if the barista and the police were looking for people making trouble, these men weren’t it.

Memorize their faces. Memorize the man on the left looking down with his hands in his pockets. Memorize the man on the right making a pained face as if this is not the first time this bullshit has happened to him. I can’t think of any situation that makes me feel more helpless and angry…. but I have to think it through. I have to think about all the ways I, as a white woman, can use the platform I’ve been given, both here and out in the world. I am generally not assertive when things happen to me personally (like truly repulsive comments regarding watching lesbians by men, for instance), but it’s a whole other thing when my mother lion gets engaged.

I am one of those hopeful people who’s been crushed by the amount of racism in my area, because DC is overwhelmingly black (a little under 50% of the population). I mistakenly thought things like that couldn’t happen here, or at least, more rarely than they actually do. I’ve cut way down on the optimism lately, anxiety rising like bile in the back of my throat.

I am no expert on race relations in DC, but it seems as if racially mixed neighborhoods have existed forever, even before gentrification…. keeping in mind that this is not every neighborhood’s case, but more often than in, say, the rest of the South. Technically, DC and Maryland are still the South because they’re under the Mason-Dixon line, but God help you if you mention it. No one around here wants to be compared with Alabama. We’d like to think we’re more progressive than that. Racial makeup of the neighborhood ceases to matter when you’re just trying to find a place you can afford.

In some ways, we are that progressive. In others, we’re not any better; we’d like to think of ourselves as liberal and inclusive, sweeping the incidents where we’re not way, way, way under the rug. If it doesn’t fit with the image we have of ourselves, it didn’t happen, definitely not a two-way street. White people just can’t be afraid of black people in the same way. I will never be afraid that a black person is going to call the police on me for anything…. ever.

Moreover, people of color absolutely cannot be racist, because racism, again, is a top-down entrenched system of oppression. They can, however, be prejudiced, stereotyping white people because they have to. They don’t know ahead of time if a friend or foe is approaching. Prejudice exists for a reason, and for people of color, it is self-preservation…. a fear that, as white people, we are absolutely responsible for creating.

For the most part, though, when we’re all on the Metro together, the racism and prejudice is left at the station. For instance, once I was waiting for the Orange Line back to Metro Center from Landover, and one of the WMATA employees came up to me and asked me if he could give me a hug, because I had a Black Lives Matter button pinned to my jacket. We just stood there and held each other, healing energy running between both of us.

While I have trouble believing that racism will be solved in my lifetime, I definitely hope.  Interestingly enough, I think Marvel has taken it upon itself to help. Movies like Black Panther and Captain America: Civil War, and television shows like Luke Cage are challenging the status quo, because they portray black people in a way that few pieces of media do. Marvel can’t be responsible for solving every racial issue, but movies and TV shows that are popular can’t hurt. For instance, nothing did more to help the queer community be seen as regular people than Will & Grace, with Six Feet Under a close second. Progress is still slow, but it’s faster than it used to be with the help of visibility.

The difference is that I only have to be afraid for my life when I’m walking hand in hand with another woman. Alone, people can only guess that I’m a minority. There is no covering up every inch of your skin. However, I do empathize because I, too, look over my shoulder for unenlightened white people. We are definitely not in the same boat, but I often believe we’re in the same part of the ocean.

As I sip my coffee, I wonder if this entire essay is going to make me look like a basic bitch. I want my thoughts to go toward some good…. perhaps make some people think. I know it reaches me. I could spend an entire afternoon brainstorming about all the ways society needs to change and what I might be able to do in bringing it forward. The most concrete way I know for myself is challenging all the microaggressions I think I don’t have. Being white is just a series of privileges that run so far under your skin you don’t even realize you’re broadcasting it.

The one good thing I can say for myself right this moment is that I can say I have black friends without lip service. I have people to teach me when I’m being a jackass without any awareness. I am lucky that my friends are willing to attribute my flaws to idiocy and not malice, because I guarantee that in terms of staying woke, I need to pay more attention when I become “sleepy.” I am lucky to have friends that have no problem calling me out on the carpet about it, even when it’s hard…. because sometimes you want to fix the whole world, and are at a complete loss as to what would help.

Although I know that at least my infinitely small part of the world will change, as long as I’m paying attention.

Coffee helps in keeping my mind busy and my eyes open. However, I cannot stay awake forever. That’s where you come in, batting relief.